I have avoided introducing my children to superheroes for as long as possible. I walk past the superhero aisle at Target, and when asked about the action figure wearing red with a spider on his shirt, I say, “That is Spiderman. He can make spiderwebs with his hands.” I always redirect the conversation because, to be honest, I don’t know how to talk about superheroes with my two and four-year-olds.

Superheroes use weapons to fight the “bad guy” (or in some cases another superhero, further complicating the matter and scraping the bottom of the superhero barrel). The enemy is always defeated by physical force and is often injured or killed in the process. I find it difficult to explain how fighting, injuring, or killing another person (or at least another weird, red, mutated being) is justified only because it’s the “good guy” doing the fighting, injuring, or killing.

Maybe it is just me, but four seems a little young for a discussion about Just War Theory.

When children play superheroes, they no longer pretend to save someone from a fire, for example. They pretend to fight each other–the sad and inevitable outcome of a radically desensitized culture obsessed with violence and victory at all costs. In superhero world, violence is required to bring peace and make the world a better, safer place. I don’t think this view of the world is consistent with the teachings of Jesus.

However, it would seem that my avoidance of superheroes has come to an end. My son has picked up on their existence. We do not live in a hole, so it was bound to happen sooner or later. My son loves to write stories (well, he likes to tell a story and have it written down by someone who can actually write), and one of his most recent stories was about superheroes:

Once upon a time, there was a school bus and a highchair. More than anything else in the world they wanted to be humans. And Batman comes and turns them into humans. Then Batman sees some bad guys coming. Oh wait, this is Spiderman. And Spiderman uses his spider webs to catch the bad guys. A chair and a tree come and they want to be humans, too. Batman turns them into humans because Batman is there and Spiderman is there, and they both have powers to turn people into humans. Then they all go back home. The end. 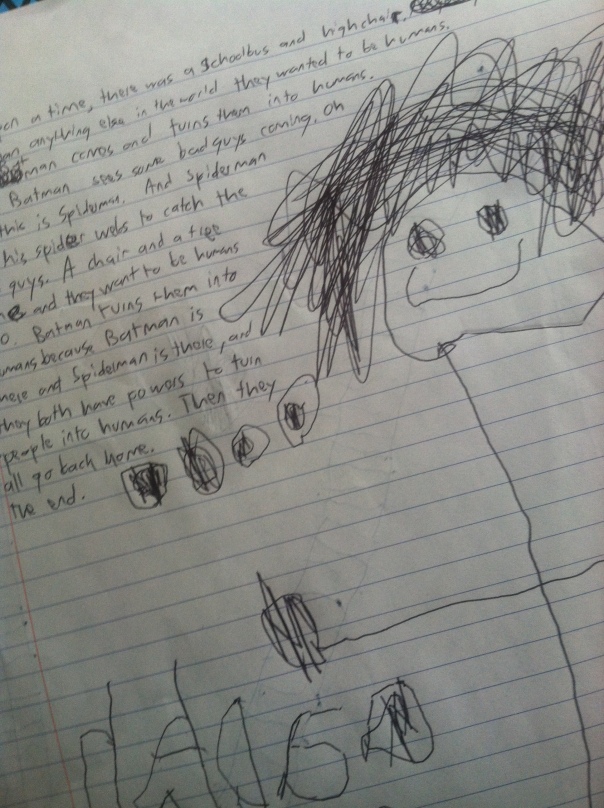 It seems all my family’s talk of peacemaking has muddied the superhero waters. According to the imagination of my four-year-old, superheroes turn people into humans. This may seem like mere semantics, but I think he is onto something.

It requires us to acknowledge that each human being comes with a story and a context, hopes and dreams, hurts and disappointments–even the ones we do not like and want to vanquish with superhero strength. Superheroes help us see each other not as mere people but as humans called and created by God. We each have the power to turn people into humans.

I foresee many, many more conversations about superheroes in my future. And I will tell my children that anyone and everyone can be a superhero. Anyone can make the world a better, safer place simply by choosing to love others. Real superheroes use words and not weapons. I will teach them to use their brain and not their brawn to work for what is right.

Real superheroes make peace, not war. They fearlessly live into their humanity as creatures of God. And they help others to do the same.

Ashley Mangrum is a minister and mother of two living in Davidson, North Carolina with her husband, Ben. In her free time, Ashley is an aspiring artist and cupcake connoisseur.