Sometimes God’s truth reaches up and smacks us in the face or sneaks up and kicks us in the behind. Other times, it whispers in our ear or blows like a fresh wind into our lives. But once it comes, we ignore it at our peril. Think Jonah.

In this week after Mother’s Day, that florist and card-maker’s dream, the truth spread out before me at the breakfast table and made swallowing my cereal a challenge.  Most days, after getting all three boys up, fed, brushed and off to school, I sit at the kitchen table, eat my breakfast and read the newspaper. As part of this routine, I’ve been developing the discipline of “praying the newspaper.” I take the news of the day and lift it up to God as I read, often whispering a “Lord, have mercy; Christ, have mercy.”

Yesterday I sat staring at the photo of the Nigerian schoolgirls abducted by Boko Haram, an extreme Islamic militant group. The girls were covered in hijab, only their faces visible as they sat reportedly praying in Arabic. Boko Haram’s leader claimed that the girls had converted to Islam, though it is unclear whether the coerced conversions will protect them from being trafficked.

Also in that edition of the newspaper was a report on sex trafficking in our area (Southeastern North Carolina). The statistics felt like blows. The average age for girls “entering prostitution” was 12 to 14; for boys, it was 11 to 13. Approximately 75% of women in prostitution were once wards of the state. 80-90% of sex trafficking victims are also victims of abuse. (Wilmington StarNews. “Sex Trade Struggle.” May 13, 2014. p. 1A; http://www.starnewsonline.com).

As a mother and as a minister, these articles reach up and grab me with the truth that girls and women still face grave injustice in our world. Boko Haram militants are cut from the same cloth as traffickers here in our country: neither value the lives of the girls (and boys) and women who, like them, are made in the image of God. These girls and women are viewed as “less than,” disposable, controllable.

Jesus says otherwise. Just as the prophets railed against injustice against the weak, Jesus made room for the children, welcoming them in as the precious gifts they are. Jesus also welcomed Mary to learn at his feet, right there in the space that had been reserved only for men for centuries. (Mk. 10:13-16; Lk 10:38-42). Girls and women, welcomed and loved by Jesus.

As a minister, I am much more comfortable being pastoral than prophetic. I’m much more at home with Ruth than Amos. But sometimes the truth of God grabs us, even at the breakfast table, and refuses to be ignored.

(Break for brief whine-fest): I want to believe we’ve come so far in our thinking about girls and women; I want to believe that the inroads already made are enough; I want to believe that God is handling this by using others better positioned than I, so I can just sit back in my comfortable breakfast-table bubble and go back to my life before I read these articles and God grabbed me. I give to World Vision and Heifer International, for Mary’s sake!

But then, with the whining over, I start wondering how I can work against injustice against girls and women. Then I find myself wondering what it would look like for mothers to join together and say “No!” to this injustice that reveals what much of our world really believes about girls and women. I find myself wondering what a group of prophetic Moms might be able to do in our world, by the grace of God. Our girls and our sisters need us to wake up to their plight–and they need us to speak up. In the family of God, these are our children and our sisters and they need us. Now.

Prophetic Moms: truth-telling love in action.  It could happen  . . . couldn’t it? 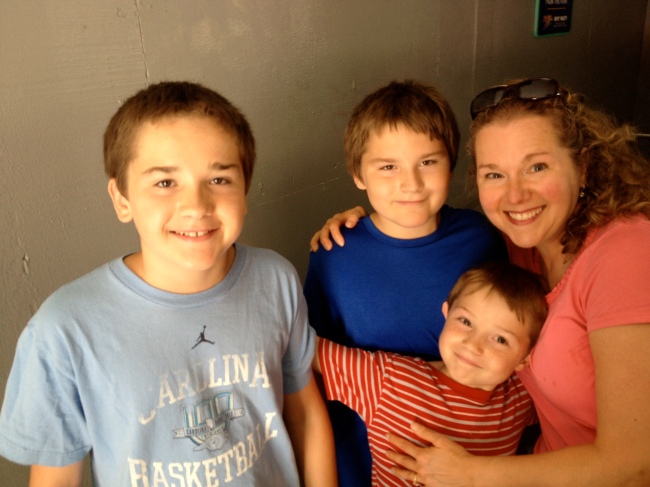