http://www.freedigitalphotos.com/gualberto107
I didn’t grow up playing sports. In the 1970’s and 80’s, suburban Atlanta was not a hot spot for girls’ sports. A few friends played soccer or softball, but most of us took dance, gymnastics or piano lessons. Rec leagues were mostly for boys.

My father, who played basketball and football in high school, took my two older sisters and me out in the backyard to teach us the rudiments of softball. Patiently, he schooled us on how to swing level, shag pop flies and attack those pesky grounders. Notably, he also had to deal with tears from fat lips (from said pesky grounders), twirling in the outfield and occasional hair pulling between catcher and batter.

I loved those backyard games with Dad pitching perfectly hittable balls in the long summer twilight. Thanks to TBS and cheap nosebleed tickets, we watched Braves baseball growing up and could name every player back when Bruce Benedict was catching. I stayed focused on baseball as the Braves (finally) won several pennants—and even the World Series in the early 1990’s. That was plenty of sports for me.

Then I moved to North Carolina to go to Duke Divinity School, where basketball is king. Strangers asked me intently, “Who do you pull for?,” meaning UNC, NC State or Duke, the big rivalries in the ACC. I took to shrugging and replying, “I’m an SEC girl,” which brought looks of pity and disappointment.

Then, I started dating an NC native who played basketball at a small liberal arts college. I shocked him into silence on our first date when he proudly showed me the “Dean Dome” on UNC’s campus and I asked who Dean Smith was (a hugely famous UNC basketball coach). He got over the shock during the next year and a half and asked me to marry him. I confessed that I would never love basketball. I married him anyway.

Fast forward seventeen years and three little boys later: our garage is filled with sports equipment, ESPN is the go-to channel and evenings/weekends are filled with church, practices and games. I quit loving baseball so much after three years and two boys’ fall AND spring seasons. I have learned to walk around the field at soccer to make the games more pleasant for me and so I won’t catch the “negatives Nellies” from the parent who can’t stop criticizing his son, the referees, the weather, the league . . .

I’d like to report that after years and years of basketball, I have grown to love the game. Not so much. In the close quarters of a hot gym, I find the intensity of the game (and the parents) a bit too much. The fouls confuse me, some of the tactics alarm me and the speed leaves me asking quite often, “What just happened?” 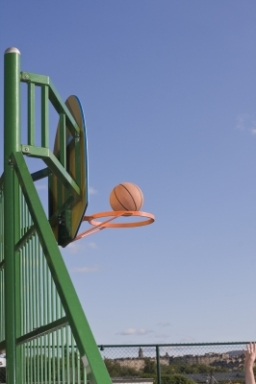 I am trying to learn to speak basketball, as I tell our boys, but it’s not my first (or second or third) language. I’ll be team mom, encourager from the stands, snack-organizer and end of season party-thrower. I have a nice loud preacher voice with a “wooo-hooo!” that can carry a long way. A true extrovert, I’ll clap and cheer and congratulate. But that’s about all I have to give.

I just don’t love sports. It’s not my main metaphor for life. I didn’t grow up in that arena of competition, with the team bonding and  sheer physicality sports demand. My husband and our sons have a wisdom rooted in that early training that is simply not part of my life. The thrill of the contest is not something that compels me. But the contest sometimes ambushes me.

As can happen in any contest, the competitiveness at my sons’ games—especially as they have grown older–sometimes seems to blur into tribalism, that us vs. them duality that can start small and end big. Painfully, I sometimes find myself getting caught up in the fervor—especially when the opposing team has been coached to just skirt the edges of the rules and good sportsmanship—and I become just as overinvested internally as some others do externally. And I deplore that feeling in myself.

In those games and their aftermath, I have to remind myself what our goal is for our boys’ sports involvement. We want them to have fun, learn the game and be shaped by working with their teammates, coaches and the referees. We want them to learn about life through sports, not that sports are life.

Tellingly, this past Saturday, after a particularly intense loss, I found myself feeling like a stranger in a strange land. I walked out of the gym in deep reflective mode. All those emotions, all that intensity, all that time and energy and effort—for a contest between middle school age children?

That evening, I watched a documentary on hunger in America called “A Place at the Table” in preparation for a writing project. My mother-and-minister’s heart ached. One anti-hunger advocate noted that in America, we have the ability and the food to make sure no one goes hungry, but we do not have the will.

I can’t help but wonder what might happen if some of the energy, time and effort we spend on kids’ sports could be harnessed for something that really makes a difference in the world. Maybe we don’t have much will leftover when we are spending so much of it on the sidelines of our children’s activities. Maybe we’re paying too much attention to what is ultimately inconsequential.

I’ll never be a great sports mom. My heart, my will, my interests lie elsewhere. But as long as my little guys are playing, I want to be  be whatever support to them I can be, which, for me, includes reminding them in word and deed what’s really important.

A native of Atlanta, GA, Reverend Alicia Davis Porterfield is a writer, teacher and certified Life Coach. She is a graduate of the University of Georgia and earned a Master of Divinity and a Master of Theology from Duke University Divinity School. After two years of chaplaincy training at Rex Healthcare in Raleigh, NC, Alicia served as chaplain at Quail Haven Retirement Village in Pinehurst, NC before her family moved to Wilmington, NC. Her husband Eric is senior pastor at Winter Park Baptist Church and together they stay busy learning and growing with their three sons: Davis (12), Luke (10) and Thomas (8). A frequent retreat leader and guest preacher, Alicia loves delving into scripture and learning with others on the journey.